Boiling Water Taps vs Kettles Energy Use [Which Is More Energy Efficient?] 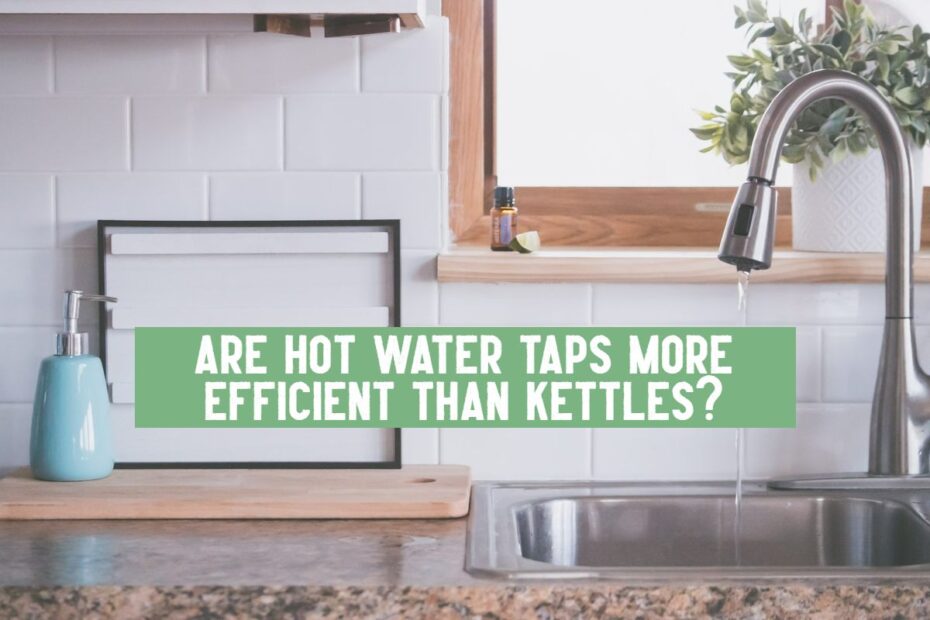 Can a boiling water tap be more energy efficient than a kettle?

Just think about how many times you fill up and boil your kettle throughout the day? Apparently, the average UK household boils their kitchen kettle four times a day.

This average is likely to increase as a growing number of people continue to work from home, which usually means brewing up throughout the day!

It begs the question of can an instant hot water tap be more efficient than a kettle for boiling water?

Yes, boiling water taps use less energy than standard kettles on a cup for cup basis.

However, there’s not that much in the energy usage and an instant hot water tap will cost you much more to buy.

There’s a number of things to consider, so here’s all you need to know about instant hot water taps, how they work, why they consume less energy compared to kettles and what their environmental performance really is.

The boom in hot water taps

Boiling water taps have become the next big thing to have in any new kitchen. They can also be easily retro-fitted into existing designs to create a more eco kitchen.

They go by a few names which all roughly mean the same thing. For the sake of this article, I’ll use the terms interchangeably. We have:

In simple terms, these taps allow you to run a more cost-efficient and energy-efficient kitchen.

No more filling up and waiting for the kettle to boil. Simply enjoy your hot drink, cup of tea or mug of ethical coffee in a matter of seconds.

There are many popular brands selling instant hot water taps now including: Quooker and Franke.

Let’s take a look at how these boiling water taps work in a bit more detail, before tackling their energy efficiency and environmental standings.

How do boiling water taps work?

This is all based on science – so how do boiling water taps work?

Drawing from your home’s water supply, hot water taps rapidly heat up the water inside an insulated tank stored right below your sink. This is all done via electricity.

Imagine it like an insulated water bottle keeping your drink cold, or more appropriately, a hot drink flask.

After the water is heated to about 96-98oC (for hot water taps) or around 100oC (for boiling water taps), it is stored in the super insulated tank at that temperature ready for you to use.

It’s important to note that the water inside the tank isn’t on a constant boil.

It gets up to the final temperature when you turn the tap on, so you can get very hot or boiling hot water straight away. This is also similar to how electric showers work.

When considering the slight difference in temperature, hot water taps are great if you want to use hot water to brew mainly coffee or tea. Instant boiling water taps can be useful in cooking situations when you need to boil pasta or vegetables.

Both boiling water taps and hot water taps can be convenient options for many households.

Yes, boiling water taps are energy efficient. They can save you plenty of energy use and reduce your household costs.

In fact, while instant hot water taps do rely on your electricity to heat up water and keep it at the correct temperature, the heavily insulated tank that comes with your tap is designed to conserve energy and prevent any heat from escaping.

As a result, boiling water taps end up consuming less energy than the average kettle. This is because no heat and energy gets wasted in the process.

On top of that, instant hot water taps tend to conserve plenty of water as well. This is because you’d only use the exact amount you need rather than filling a whole kettle before boiling as many people do.

I was pleasantly surprised by this in the same way I was surprised that eco slow cookers use around 10 times less energy than a standard electric oven.

So, let’s compare the energy use of boiling water tap vs kettle.

On average, a hot water tap will use around 10 watts of energy an hour to constantly maintain the water at the desired temperature. This is 0.01kW.

As of October 2022, the price guarantee electricity rate will be 34 pence per kWh.

Over the course of 24 hours, a boiling water tap using 10 watts of energy will cost you 8.16p.

So for running costs, a boiling water tap is cheap to run.

Compare this to the average kettle which will use between 2-3 kilowatts of energy every time it is switched on. This is 2,000 – 3,000 watts (compared to boiling water tap’s 10 watts.

It will only take a few kettle boils to surpass the energy of a hot water tap, then you have the wasted energy and excess water use on top of that.

Overfilled kettles end up being reheated more often as well.

I’ve done this plenty of times in the past and it ends up using a lot more energy than a hot water tap would. I’ve now started to store any over-boiled water in a thermos or insulated water bottle to use later on, which is working very well.

If you think you’ll be looking for a kettle too, take a look at these eco energy efficient kettles.

With that said, putting an exact number on how much energy is used and saved with hot water taps vs kettles is not an easy feat. It mostly depends on how much you use your tap.

Is it cheaper to boil a kettle or run the hot tap?

The main reason why so many households are considering switching to boiling water taps comes down to not only their convenience but also their potential for savings.

It’s estimated that instant hot water taps can use up to 50% less energy than conventional kettles, slashing around £25 off your energy bills each year.

Keep in mind, however, that these numbers are just theoretical estimates. It’s possible that you might already be using your kettle in an energy-efficient way (never filling up more than you need, only heating the water once etc).

For many, the upfront cost of installing a boiling water tap might actually work out as more expensive than simply sticking to a more sustainable kettle-boiling regime. As kettles are electrical items, it’s important that this e-waste is recycled properly.

The average hot water tap can set you back anywhere between £900 and £4,000, although you can find more affordable models for a little over £500. Even the cheapest instant water taps come with a hefty price tag.

While continued use of the instant hot water tap might offset the initial investment, the additional cost of repairs, maintenance and expensive filters might not be worth the energy savings in the long run.

According to Which?, a hot water tap might end up costing you more than twenty times as much as a regular kettle.

While these convenient taps might not live up to their money-saving reputation, they are generally considered a more eco-friendly choice compared to average kettles.

On top of cutting energy usage to up to an estimated 50%, boiling water taps can also help households cut down on water waste, as you’ll only be using what you need as you turn on the tap.

Let’s also consider the environmental impact behind their manufacturing.

Hot water taps are made of various metals (such as brass) alongside plastic components, and in order to produce them, the raw metals have to be melted and moulded to create their shape.

Despite the energy needed to produce molten metal and casts, this process is considered quite sustainable, as all scrap materials can be recycled and the moulds can be reused many times before disposal. Take a look here to see the sustainability of stainless steel.

Compared to kettles, there’s not much between the environmental impact of production. Generally speaking, most kettles contain different metals and plastic too – even stainless steel kettles.

When we put everything together, do hot water taps really come out on top as a more eco-friendly option than kettles?

The answer is yes, but only marginally.

In fact, research shows that boiling water taps are slightly more energy-efficient and water-saving than using a kettle if you’re not overfilling it and reheating the water multiple times! It all depends on how you use your current kettle.

As long as you’re making sure you’re only filling your kettle with the water you need and avoiding reheating leftover water, you’re already taking care of the main issue without having to invest in expensive products like instant hot water taps.

A top tip here is to boil your kettle, use the water you need immediately, then fill up thermally insulated bottles with the boiling water to use throughout the day. This is kind of like an instant hot water tap, minus the huge expense!

And if you’re opting for a second-hand, energy-saving electric kettle, the environmental benefits will be even bigger!